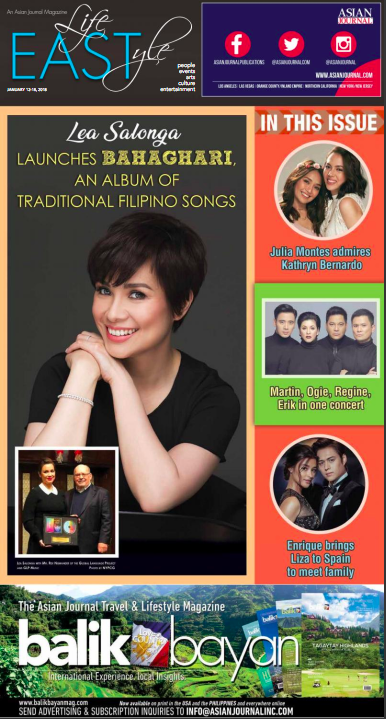 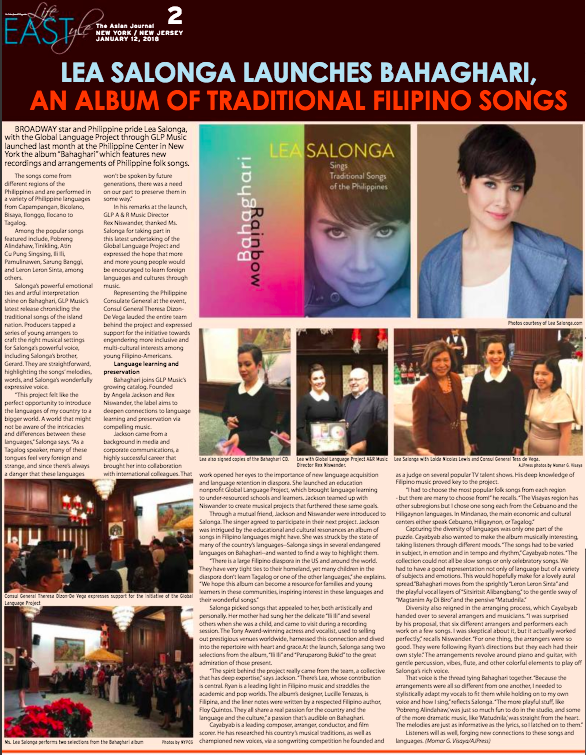 The songs come from different regions of the Philippines and are performed in a variety of Philippine languages from Capampangan, Bicolano, Bisaya, Ilonggo, Ilocano to Tagalog.

“This project felt like the perfect opportunity to introduce the languages of my country to a bigger world. A world that might not be aware of the intricacies and differences between these languages,” Salonga says. “As a Tagalog speaker, many of these tongues feel very foreign and strange, and since there’s always a danger that these languages won’t be spoken by future generations, there was a need on our part to preserve them in some way.”

In his remarks at the launch, GLP A & R Music Director Rex Niswander, thanked Ms. Salonga for taking part in this latest undertaking of the Global Language Project and expressed the hope that more and more young people would be encouraged to learn foreign languages and cultures through music.

Representing the Philippine Consulate General at the event, Consul General Theresa Dizon-De Vega lauded the entire team behind the project and expressed support for the initiative towards engendering more inclusive and multi-cultural interests among young Filipino-Americans.

Jackson came from a background in media and corporate communications, a highly successful career that brought her into collaboration with international colleagues. That work opened her eyes to the importance of new language acquisition and language retention in diaspora. She launched an education nonprofit Global Language Project, which brought language learning to under-resourced schools and learners. Jackson teamed up with Niswander to create musical projects that furthered these same goals.

Through a mutual friend, Jackson and Niswander were introduced to Salonga. The singer agreed to participate in their next project. Jackson was intrigued by the educational and cultural resonances an album of songs in Filipino languages might have. She was struck by the state of many of the country’s languages–Salonga sings in several endangered languages on Bahaghari–and wanted to find a way to highlight them.

“There is a large Filipino diaspora in the US and around the world. They have very tight ties to their homeland, yet many children in the diaspora don’t learn Tagalog or one of the other languages,” she explains. “We hope this album can become a resource for families and young learners in these communities, inspiring interest in these languages and their wonderful songs.”

Salonga picked songs that appealed to her, both artistically and personally. Her mother had sung her the delicate “Ili Ili” and several others when she was a child, and came to visit during a recording session. The Tony Award-winning actress and vocalist, used to selling out prestigious venues worldwide, harnessed this connection and dived into the repertoire with heart and grace.

At the launch, Salonga sang two selections from the album, “Ili Ili” and “Paruparong Bukid” to the great admiration of those present.

“The spirit behind the project really came from the team, a collective that has deep expertise,” says Jackson. “There’s Lea, whose contribution is central. Ryan is a leading light in Filipino music and straddles the academic and pop worlds. The album’s designer, Lucille Tenazas, is Filipina, and the liner notes were written by a respected Filipino author, Floy Quintos. They all share a real passion for the country and the language and the culture,” a passion that’s audible on Bahaghari.

Cayabyab is a leading composer, arranger, conductor, and film scorer. He has researched his country’s musical traditions, as well as championed new voices, via a songwriting competition he founded and as a judge on several popular TV talent shows. His deep knowledge of Filipino music proved key to the project.

“I had to choose the most popular folk songs from each region – but there are many to choose from!” he recalls. “The Visayas region has other subregions but I chose one song each from the Cebuano and the Hiligaynon languages. In Mindanao, the main economic and cultural centers either speak Cebuano, Hiligaynon, or Tagalog.”

Capturing the diversity of languages was only one part of the puzzle. Cayabyab also wanted to make the album musically interesting, taking listeners through different moods. “The songs had to be varied in subject, in emotion and in tempo and rhythm,” Cayabyab notes. “The collection could not all be slow songs or only celebratory songs. We had to have a good representation not only of language but of a variety of subjects and emotions. This would hopefully make for a lovely aural spread.”

Bahaghari moves from the sprightly “Leron Leron Sinta” and the playful vocal layers of “Sitsiritsit Alibangbang,” to the gentle sway of “Magtanim Ay Di Biro” and the pensive “Matudnila.”

Diversity also reigned in the arranging process, which Cayabyab handed over to several arrangers and musicians. “I was surprised by his proposal, that six different arrangers and performers each work on a few songs. I was skeptical about it, but it actually worked perfectly,” recalls Niswander. “For one thing, the arrangers were so good. They were following Ryan’s directions but they each had their own style.” The arrangements revolve around piano and guitar, with gentle percussion, vibes, flute, and other colorful elements to play off Salonga’s rich voice.

That voice is the thread tying Bahaghari together. “Because the arrangements were all so different from one another, I needed to stylistically adapt my vocals to fit them while holding on to my own voice and how I sing,” reflects Salonga. “The more playful stuff, like ‘Pobreng Alindahaw,’ was just so much fun to do in the studio, and some of the more dramatic music, like ‘Matudnila,’ was straight from the heart. The melodies are just as informative as the lyrics, so I latched on to them.”

Listeners will as well, forging new connections to these songs and languages.